Puerto Rico’s Housing Secretary Fernando Gil, has claimed that half of the housing in the island has been built without permits, this according to an article by Andres Viglucci published in the Miami Herald on February 14, 2018, see here. If half of that claim is correct, then it provides for a damning assessment of Puerto Rico’s building permit system, at least it demonstrates its partial failure. It also sheds light to the fact, that although over regulated, the island’s permit system is not functional, hard to implement and extremely difficult to supervise. The article hints to lack of permits as a possible cause to over 250,000 homes suffering major damages during Hurricane María, of which 70,000 were destroyed. The article also points to the whopping 1.1 million households that have applied for FEMA disaster aid and the administration of Gov. Ricardo Roselló’s statement, that it will cost $31 billion dollars to rebuild the housing stock. 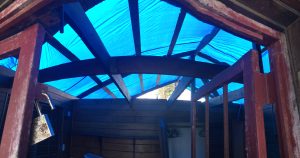 It would seem rather hypocritical to be alarmed at a reality that was obvious and tolerated by everyone, especially the government. But then again it’s a political issue, that requires a nonpolitical analysis and solution. Precisely for that reason, it has never been addressed. If we do have a discussion on how to address the failure of Puerto Rico’s building permit system, then we must start by being frank and realizing that any construction according to codes, designed by licensed professionals and in compliance with all the regulatory requirements, is not affordable to the majority of the island’s population. If we forget this fact, we’re doomed to fail and destined to enact regulation that only half of the population can realistically comply with.

Now we can keep adding regulations, complicating manners and putting up stricter codes, or we can be practical about this. It would seem better under any circumstance, that the majority complied with less stringent regulations, than less than half complied with more stringent ones. It would be better to have less and more simple regulation that addresses our local needs and facilitate compliance with the regulatory process, than continue to regulate and make it ever less likely that the populace will comply. This will at least reduce the amount of catastrophic damage suffered by the population. In the end, its in our hands to determine the road we take regarding Puerto Rico’s permit system, but we should at least consider the less traveled one, as it would better serve our island’s reality.

See the following study performed by the White House (Obama Administration), regarding increments in construction cost and the permitting process.

The purpose of this site is to provide regulatory and legal information regarding construction, permitting and zoning, environmental and real estate law in Puerto Rico. For additional information and consultations, please contact the Law Offices of J.é Fullana & Assoc.